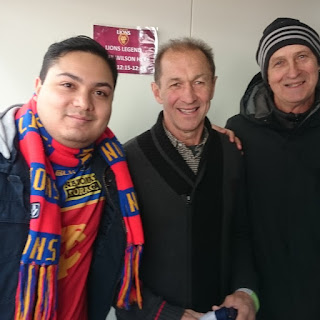 Above: my photo with Fitzroy legends Garry Wilson and Bernie Quinlan

When I was four years old, I supported the Fitzroy Lions in the AFL because my father supported them. He immigrated from Italy in 1966 and he lived in Fitzroy, hence why he barracked for them.

After Fitzroy merged with the Brisbane Bears in 1996, my father and I decided to support the newly-created Brisbane Lions and we have experienced the highs and the lows this team has experienced in the last 20 years.

My blog posts are about the form of the current side and how they have been tracking. I pride myself on giving on honest opinion so my criticisms can be harsh but I will lavish praise when it is merited. Hopefully other Lions supporters can share their views on the club too.

To read all of my posts about Brisbane, click here.