Sampdoria has lost its seventh consecutive Serie A match in a row and one can only wonder how things can go right if Ciro Ferrara stays at the helm. 19-year old Argentine striker Paulo Dybala netted a brace in Palermo’s 2-0 against Samp but the Genovese club looked like a defeated team from the first whistle. Hardly any Palermo player could put a foot wrong and Sampdoria was a team that lacked confidence, ambition and leadership. The Genoa derby is next and even though the ‘rossoblu’ are struggling too, they would love to take a scalp against their city rivals.

Ferrara’s team was compact but the players didn't press Palermo players hard enough. When the ball was won, the Samp players struggled to put passes together. Nobody looked eager to be a leader or seize the initiative. None of the midfielders looked capable of playing in the ‘regista’ role. It was only when Palermo went 2-0 up that the Samp midfield looked like it could create chances.

Eder looks like a man out of his depth. A prolific scorer in Serie B for Empoli in 2009/10, he went back to Serie B in January this year, helping ‘i doriani’ return to Serie A. Despite having a decent scoring record at Brescia in its last season in Serie A, he struggled at Cesena and he hasn't been doing much better with Sampdoria in the top flight. His performance against Palermo was marred with poor passes and an inability to stay on his feet.

Romero saved Sampdoria from further humiliation. He made many vital saves and rescued what was an open and nervous defence. Dybala and Ilicic were causing their fair share of headaches and the Samp keeper was cool, even in one-on-one situations.

Icardi came on for the last 30 minutes or so and even though he didn't score, he made some impact in attack. He got his teammates involved and created some presence in attack, which Eder couldn't do. Juan Antonio also came on in the second half but he didn't make much of an impact. The attacking midfielder hasn't been used like he was under Giuseppe Iachini’s reign as coach.

Ferrara has been using age as an excuse, pointing out the lack of experience in the team. Psychologically, this Sampdoria side is playing with fear and does not look capable of facing their fears. Perhaps those last 20 minutes in the match showed the crowd that Ferrara’s side should play at a high tempo more often. The players were more instinctive.

Genoa has been incapable of getting results too, even after its president Enrico Preziosi sacked Luigi De Canio. Ex-Sampdoria coach Luigi Del Neri has lost all four Serie A matches as ‘grifone’ coach. Sampdoria’s rivals have also shown an inability to hold on to leads, perhaps falling into the cliché that Italian teams can’t last for 90 minutes.

Both Genovese sides are near the Serie A’s relegation zone and have no fondness for their presidents. Preziosi buys good players for big money or loans but there is no stability. In the ‘blucerchiato’ half of Genoa, president Riccardo Garrone is buying players for cheap prices and letting go of players for considerably less.

Genoa’s circumstances differ from Samp’s to an extent but when it comes to derbies, ‘i grifoni’ play very physically. Marco Rossi usually goes out there to prove that he is the biggest anti-Doria of them all but fortunately he won’t be available to hassle ‘i doriani’ in person. Ferrara’s players need to show that they are men and that they belong in Serie A. Genoa up the ante more than other teams in Italian derbies. If Sampdoria was scared against Palermo, it will be worse unless the players run their socks off and press ‘i grifoni’.  ‘I doriani’ must not show any weaknesses because this match means more than the previous seven. A loss here will really hurt the ‘blucerchiati’ faithful but Ferrara and the players owe it to the fans to stop further agony. It's early days but it would be cruel if Sampdoria went straight back into Serie B.

Brisbane defeated Carlton by 30 points at the Gabba on Sunday evening in a scintillating display of footy which gave the Lions their fourth victory of the season. Aside from a shambolic third quarter in which the Blues showed signs of making a comeback, Brisbane dominated the majority of the match and played some its best footy under new coach Chris Fagan. The usual suspects stood out for the Lions but more of the youngsters stood out, with both Cedric Cox and Alex Witherden also kicking their first goals in the AFL. Here are five points worth discussing after the victory including the brilliance of the two Daynes, Zorko and Beams. 1. Dayne Zorko is the modern Akermanis Jason Akermanis is my favourite Brisbane player of all-time and he was an absolute freak. "Aker" was a player capable of producing something out of nothing and scoring the impossible goals but he was also fortunate to have played in a dominant Lions team. Zorko does not have the bleached hair o 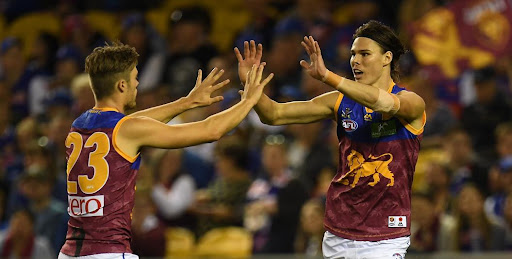 There is a dearth of key forwards in the AFL these days and it seems that the current forwards are given too much time to develop. Although the media and the fans have this belief that it takes key position players five years to develop, I consider it to be no more than a fallacy and modern day myth. This is now the time for key forwards of the current era to display maturity beyond their years but this consensus that it takes five years for them to develop as well as a lack of great key forwards means that fans should accept mediocre performances for a while. The reasons for my ire are the wayward kicking of forwards in the AFL and the performances of Brisbane Lions key forwards Eric Hipwood and Josh Schache. In Brisbane's 14-point defeat to the Western Bulldogs in Round 20, Hipwood and Schache recorded some unimpressive statistics. Hipwood had 17 disposals, took just three marks, and was kept scoreless while Schache had six disposals, took four marks, and kicked

St Kilda great Nick Riewoldt announced his retirement on Monday and he will play on for the remainder of the 2017 AFL season before hanging up his boots for good. The 34-year-old has played 333 AFL games for the Saints and he has kicked 714 goals since making his debut in 2001, often playing in a starring role at centre half-forward but also capable of performing in a different number of roles under current coach Alan Richardson. Since Richardson become the St Kilda coach in 2014, there has been a strong reliance on Riewoldt as well as fellow veteran Leigh Montagna, who is yet to announce his retirement but could make a decision on his future depending on the Saints making the finals or not. In addition to paying tribute to Riewoldt's illustrious career, I made a video about my thoughts on the post-Riewoldt St Kilda.